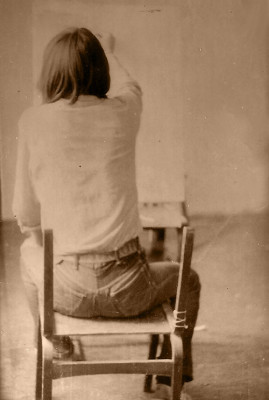 Marat was born in 1965 in Kazakhstan. Since childhood, he has been characterized by exceptional sensitivity and special vision of the surrounding world. His affection for drawing led him into Kazakhstan’s Alma-Ata Art College, where he obtained classical artistic education.

During his college years, Marat became one of the leaders of an underground group of young artists dubbed “The Green Triangle,” and participated in many prestigious exhibitions.

The search for new forms of self-expression, such as: the comprehension of the surrounding world, riot against the traditional ways of life, a desire of the realization of those beating through the edge of energy and ideas – all these brought together young artists of those times.

The first two exhibitions of the underground group, which both took place in 1989 at the “Kniga” museum and the “Perekrestok” in Alma-Ata, represented a breakthrough towards freedom in the numbed environment of post-Soviet times.

The subsequent exhibitions of Marat in the Architect Union and in the “Rukhani” rock club, in cooperation with “The Green Triangle” in 1990-1991, contributed to artistic development and triggered waves of action in the creative circles of Alma-Ata of those times.

“The Green Triangle’s” exhibition at Voznesensky Cathedral Square attracted absolute masses. Indeed, this was a prominent event for the city. Numerous abstract, incomprehensible pictures and eccentric young people triggered waves of enthusiasm and supplemented the rows of those “thinking differently.”

Members of “The Green Triangle” became sheer legends of the Alma-Ata underground.

At the same time, there appeared hundreds of graphic creations, with endless crossing lines that formed countless images in the limited space of a sheet, thus revealing its infinite potential. The exhibition, “Reverse Side of Pictures,” in the showroom of the Union of Artists, was sponsored by businesswoman Makhabat and received much positive feedback for its rather nontraditional approach to art.

Marat presented his work at a Kazakhstan exhibition, dubbed “Eurasia,” in the prestigious Kasteev Museum of Arts named after A. Kasteev, just before his departure to Israel in 1996. His works are characterized by original color compositions, by spiritual and emotional fullness, and soon earned most flattering praises.

Marat also participated in the “Nevada – Semipalatinsk” exhibition voicing objection against nuclear weapons, together with rock musicians from Saint Petersburg. In exchange for The Green Triangle’s wall painting effort adorning the children’s hospital oncologic hall, the artists were presented the opportunity to travel to Moscow and participate in the one and only Russian “Pink Floyd” concert.

After his arrival in Israel, Marat discovered new experiences unfamiliar to him. He now works tirelessly, with enthusiasm and purpose. Marat frees his imagination with fantasy, both conscious and subconscious, employing both meditation and intuition.

His eagerness shed all burden, freed from the surrounding world’s constrictions, to understand the secrets of the universe.  This attracts him to the expressive splash of colors and new-discovered forms melding into numerous mystical compositions.

The originality and the special energy of Marat’s drawings attracted a young French husband and wife who in 1996 exhibited Marat’s creations in Strasbourg. In 1998, Marat organized his own personal exhibition in Tel Aviv, in the Matusevich Gallery. Marat’s works have been purchased by art aficionados from all over the globe.

Currently, Marat is exhibiting his work in both personal and group exhibitions.  Notable is an annual showing at the Israeli Festival of Wine. Among his greatest accomplishments is Marat’s cooperation with “Taldor”, a project which includes heroic sized murals enriching the walls of many schools throughout Israel. Marat has also worked with many children, triggering their love for art by creating legendary worlds with the help of his restless brush and a wide selection of colors.

Marat’s passionate desire to conquer “kilometers of canvas and tons of colors” materialized through a major project ordered by “Mikhlala le-Minhal.” Three floors of a college in Or Yehuda, Israel, were suddenly filled with color and new energy. Within a year, Marat painted each and every corner of the building. As if in a museum, people are offered the rare opportunity to stroll the corridors, examine the views, the intricate compositions, and the portraits. The “kilometers of canvas” forbid the viewers to turn their eyes away.

Marat’s expressions attract the viewer, urging him to initiate an unknown journey, and immerse himself into thoughts about unknown existence. Marat is devoted to art and considers it his life!